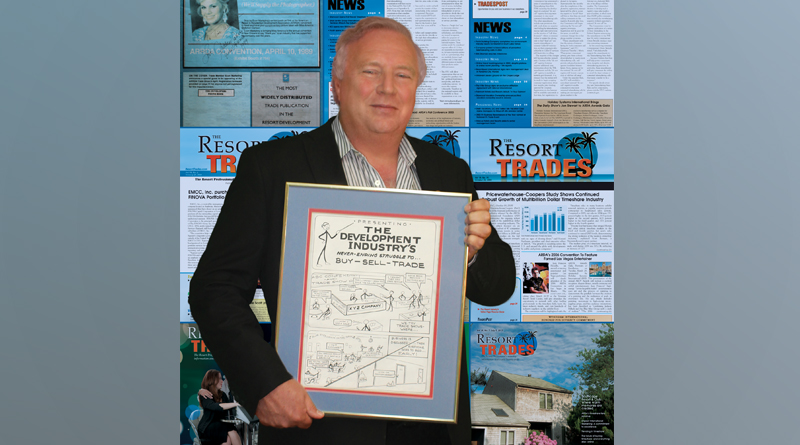 You might say the timeshare resort business is a “family affair” for Tim Wilson, publisher of Resort Trades. He grew up around a large land-based resort that his dad, Jim Wilson, developed in Crossville, Tennessee. He graduated with a degree in civil engineering degree from Tennessee Technological University in 1980.

“At the time I graduated, my dad was partnered with Lawrence Stillmen, who owned NACO. Dad was responsible for lot resales and, more importantly, for the construction – all design and construction of homes, administrative buildings and the new timeshare units. My father was involved in the physical aspects of most of the NACO timeshare developments in the late ‘70s throughout the country. I had the opportunity to get an inside view of the industry from its inception.

“I went from college straight to NACO’s home office in Mississippi and worked in the engineering office for about a year,” said Tim.

After that, Tim came back to Tennessee to work with his dad. “We split from NACO. Dad started developing a large RCI resort, Boardwalk on the Lake, and within a couple of years I ended up being the project director. I was in charge of sales and marketing.

Tim worked as a vice president and board member for ISI for a number of years defining what a management company was, and helping the state legislature in Tennessee write the Model Timeshare act of 1980. Tim says his “claim to fame” at the time was that he understood computers. Sensing a need to educate himself on the financial side of business, he went back to college at night and earned his MBA.

Crossville had five major resorts at that time, so Tim decided to start a visitor’s guide publication as a side business that he produced for three straight summers.

“As far as magazines in the resort industry at that time, there was Developments; RCI had a publication and there were three or four others. At that time, I was getting them all, because I was sitting in the manager’s chair of a major resort, in charge of buying all the premiums and doing all the purchasing. When it came time to finding a new direct mail company, I had a hard time doing so. Those types of vendors scarcely advertised in those magazines,” Tim explained.

“I called up several companies that I knew existed and asked them why their ads weren’t available. They said it was just too expensive to advertise in those magazines. The publications were owned by companies who had interests, other than producing a publication. In other words, their publications were created to basically to promote their agendas, not to be an informative resource for readers. It appeared that the advertisers they had were an elite group of only the biggest vendors who could afford expensive rates.”

So, Tim thought about launching a publication for the resort industry that would enable a broader number of vendors and suppliers to get their message out; one that would be affordable enough so anyone in the industry could advertise.

“We started in the spring of 1987. I basically took my Rolodex of suppliers including any vendors who had ever called me. I gave them as prospective advertising leads to a couple of people that worked my sales line at the resort and said, ‘Call these guys, tell them what I’m going to charge for ads and let’s get this thing going.’ And so I launched Developmental Trades, as we called it at the time.”

“There’s an old MBA adage that says, ‘Find a need, fill a need,’’ he adds. He realized that there was a need: create a platform for advertisers that is affordable and is seen by the people who actually make the purchasing decisions.

When Tim decided to publish The Trades, his first marketing effort was a 20-page comic strip designed by him and his father. It essentially poked a little fun at some of the marketing techniques they’d observed. The comic strip introduced the new magazine to the industry. Surprisingly, the comic strips proved to be so popular that for the next few years Tim had to conceive a new strip every month, take it to the artist and reproduce it in the magazine. Eventually, as the editorial content grew, the cartoons were discontinued. But, there may be some veterans reading this article who remember the series.

Resort Trades mails to 7,000-plus subscribers monthly. “The publication truly goes to the people in the industry. It reaches everyone from the highest executives of large companies, to the general managers and assistant managers of smaller resorts. We are still very project-based. We recognize that there are more than just the few large, publicly-held resort companies out there. What we deliver is news that can be useful at the project level and by any management team whether they’re in charge of a huge, high-rise or managing a smaller, single-site resort; and whether they are in active sales or were sold out years ago,” Tim said.

“We provide this industry with an independent source of information that allows readers to see all the people who are serving the industry and what they’re offering, as opposed to only the ones who can afford the high glossy ads.

“From a news publication standpoint, and an educational standpoint, it’s very important that you have a publication that is unbiased in what they are saying. We don’t serve any master other than our readers. We’re not dependent upon just a few major advertisers, either.”

Tim said there is a lot of focus right now on the general managers at what’s being called ‘legacy resorts.’ These are the single-site, older properties that are no longer being promoted or maintained by a developer. “The interesting thing is the entire industry has suddenly discovered these legacy resorts, and they’re all rushing to get stuff in front of these general managers, whereas we’ve sent a magazine to these guys every month for more than two decades.”

He went on to say, “We’ve been the publication that talks about things like bed bugs. It’s not sexy to write an article about bed bugs. You may not see that in our competitors’ publications. Perhaps there are some publishers that actually sell editorial and the cover photo position to developers so that they can buy extra copies to put on a coffee table in the sales lounge.

“That’s making a profit, but it’s looked down upon like prostitution in journalism. Writing an article on bed bugs, lawn maintenance, amenities, reserve accounts – these are the types of articles we publish to help someone run their business. We’ve always done that. As a result of our editorial policies, managers, assistant managers, department heads have been the readers who have always been our major focus and who look forward to receiving Resort Trades. They know they will learn something.”

‘Jack of the Trades’

There are a lot of people in this industry who might not be where they are today had it not been for the efforts of Jack Richardson, a close friend of Tim’s who worked for Resort Trades since its inception. He had the nick name, “Jack of the Trades,” because of his proficiency in every department of the journal.

“Jack was known for his ‘Jack-isms,’ each of which he attributed to his dad. One was, if you want to be rich, always look around and see what the poor people are doing and … don’t do that.”

Most importantly Tim said, Jack’s comment was, “I always sell to my friends.” He would always tell other sales people that in order to sell something to someone, you have to know them first. Everybody knew Jack, and they would take his calls. The American Resort Development Association (ARDA) named their educational scholarship after Jack the year he passed away.

Jack always made sure to persuade everyone to become a member of ARDA. “He would laugh and say that he would sell them an ad first, but then he would make sure that they had an ARDA membership. As a result, we were the leading producer of memberships for a time.”

“We still have some very unique problems to be solved with this timeshare product. One, of course, is resales. As early as 1985

we began addressing this as a problem that needs to be solved. Solve it, or it will be solved for you,” said Tim.

“For some reason, a problem’s not a problem until it’s your problem. It wasn’t a problem for the developer when an individual owner wanted to sell their unit. But lately there have been transfer or ‘postcard’ companies that threaten the health of the industry by failing to pay maintenance fees. Once this issue became a more prevalent problem, it started getting solved. I think the fraudulent transfer companies will be driven out of business, having taught us all a lesson.

“I also think we’re going to see a resurgence of new and independent developers coming in doing niche resorts. You need to have new blood, and I think that’s what we are going to see.”

Continuing with the family connection, Tim and his new bride Sharon Scott (formerly Sharon Drechsler-Scott) are partners in a new endeavor, Resort Academy, an online educational resource for resort managers. The new website will offer management tips and tools, a social sharing platform, webinars and manager-specific news. Resort Academy is a multi-faceted resource built by and for those people responsible for operating a resort, whether they are managers, management team members or HOA board members.

In addition to publishing Resort Trades, The Trades Publishing Company produces The Golf Course Trades and The Park & Recreation Trades magazines. Tim is still a developer today, specializing in niche subdivision of homes for RV enthusiasts – the Gardens RV Village in Crossville. But his passion for the resort industry remains.

“We recognize that with the many changes in the industry, we are serving a reader who depends on us now more than ever. Our readers are looking for more than a series of self-promotional articles and press releases. They don’t really have the time for them; they want in-depth, interpretive information they can use in their businesses, immediately.”

And from the advertiser’s point of view, we are producing a news publication that is in demand and affordable,” Tim says.

“In the light of Sharon’s and my recent marriage, we’ve begun to look at Resort Trades with fresh eyes. We’ve been around for more than 25 years and feel we’ve done a darned good job. Resort Trades is well recognized, well-received and we continuously receive positive feedback about our content. What a great time this is to build on this strong foundation! In the years to come we are looking forward to strengthening our brand and solidifying our position as the industry’s news journal bringing reliable, current and relevant information to resort operators.” 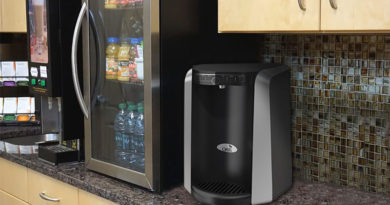