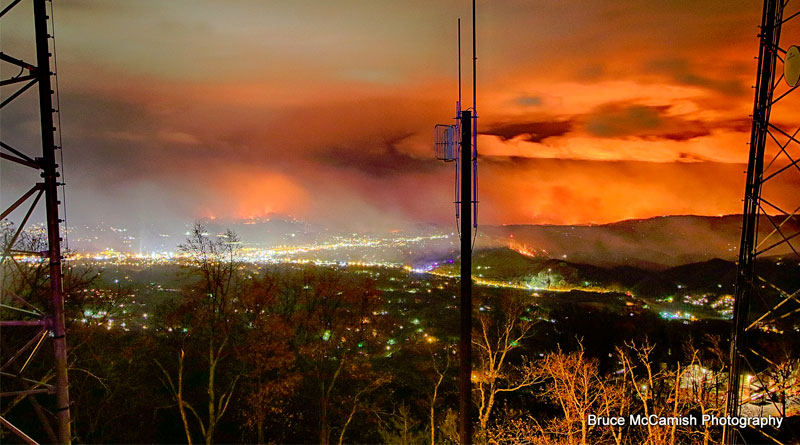 Update via Black Bear Falls Facebook page: “It appears the news stations have mistakenly reported the wrong community name. Black Bear Falls has not been impacted by the fires at this time.”

“Westgate Smoky Mountain Resort & Spa has sustained some damage and will be temporarily closed… The resort will be closed until further notice and we will post more information as it becomes available. All existing reservations are being automatically canceled through the end of the year.” –  Update via Westgate Facebook page

Resort Trades spoke earlier today with Nick Gray, a senior executive with Amber Management Group, which operates Sunrise Ridge Resort and Oakmont Resort in Pigeon Forge, as well as Tree Tops Resort in Gatlinburg. “We were ordered to evacuate last night,” said Gray. “As they left, staff at Tree Tops said the fire was getting close to some of our outlying units.”

“Even with the rain that is currently falling there, the fires continue to burn and structures remain engulfed with little hope that the rainfall will bring immediate relief,” TEMA said. Experts suspect arson triggered the firestorm which has grown to cover hundreds of acres. ABC News reports, “Other popular Gatlinburg attractions appear under threat, including Ripley’s Aquarium of the Smokies, which has 1,500 animals. Staff was forced to evacuate Monday evening, leaving the animals still inside….”

At Dollywood, in Gatlinburg, officials with the Great Smoky Mountains National Park evacuated guests from its resort and cabins as flames approached the area. According to social media reports, the theme park, owned by singer and actress Dolly Parton, will probably not survive.